International solidarity against the attacks of the so-called „Antideutsche“! Anti-Zionism is not anti-Semitism!

Translation of a joint statement of internationalist groups and organisations from 13. June 2019

The following Joint Declaration of Internationalist Groups and Organizations was adopted on 13. June 2019. The signing groups urge organisations of the global left and labour movement to support the couragoeus groups who are standing against racism and imperialism in Germany. We ask you to convince your organisations to sign the resolution, support the internationalist left in Germany and to use this campaign as a means to build strong networks that can challenge slander campaigns, claiming that „antizionism is antisemitism“ and support anti-colonial struggles.

Anti-Zionism is not anti-Semitism!

Attacks on internationalist, anti-capitalist and anti-imperialist forces have been increasing, particularly in recent months. So-called „Antideutsche“ are agitating against all progressive left-wing, democratic, socialist and communist forces that are critical of Israeli policies and their support by German and/or US imperialism. Even more, they denounce any solidarity with the Palestinian people’s resistance and anti-Zionist forces.

Under the accusation that „anti-Zionism“ is „anti-Semitism“, the increasing right-wing danger to life and limb in Germany and Israel to leftists and migrants is minimized while the real growing anti-Semitism of the right is downplayed. The central purpose of the criminalization of anti-Zionists, however, is to silence any criticism of Israeli and German pro-Zionist foreign policy, any solidarity with the Palestinian people and, as a rule, any criticism of imperialist interventions in the Middle East.

To this end, the „Antideutsche“ support right-wing and racist governments, such as those in Israel and the US, and attempt to denounce any criticism of these states as anti-Semitic, even those critiques by Jewish anti-Zionists.

The so-called „Antideutsche“ are not limited to verbal and written harassment, but also resort to other means.

The so-called „Antideutsche“ spectrum also has moved, in the context of the current political shift to the right, in a deeply racist direction: authors like Justus Wertmüller and Thomas Maul (from the magazine „Bahamas“) actively support the AfD in its anti-Muslim racism or the racist mob of Chemnitz. But even the less „extreme“ parts of this spectrum are deeply engaged in political attacks against leftists, anti-racists and internationalists and in defamating them as „anti-Semites“.

Such politics actively hinder the formation of resistance against the swing to the right in the Federal Republic of Germany and ultimately plays into the hands of right-wing forces, which are increasingly strengthening not only in the parliaments, but also on the streets, and pose a growing danger for us all.

Instead of splitting and defamation, the fight against the right, against sexism, racism and nationalism today more than ever requires solidarity and common actions by us: workers, migrants, young people, women, LGBTIAs, school and university students. We see no contradiction in confronting racism together on the street and still representing diverse political positions on various topics.

Together against exclusion and defamation

We will fight together in the future against the exclusionary policies, defamation and attacks of „Antideutsche“ – despite our political differences.

We urge all those who understand anti-fascism to be not just a „scene“ but a serious political practice to fight together against these slander campaigns. We will not allow ourselves to be bureaucratically and arbitrarily excluded from alliances and actions. We will not relinquish our freedom of speech and propaganda!

The criminalization of anti-Zionist forces in Germany is a pilot project to suppress any political movement in the future that criticizes the foreign policy of the German government and imperialist interests. Turkish and Kurdish leftist organizations face searches of their homes, arrests, political bans and terrorism allegations. In the future, for example, similar actions against left-wing movements are conceivable, such as those that stand against a military intervention in Venezuela or against the right-wing government in Brazil.

The attacks against Palestinian organizations are part of the repression targeting the entire international left.

Therefore, we call on all internationalist forces in the left and workers‘ movement to fight together against this type of denunciation.

We, the undersigned organizations and alliances, pledge to join forces against future attacks by so-called „Antideutsche“ and together oppose all attempts at exclusion.

We oppose their defamation campaigns, exclusion and slander with our international solidarity! The fight against the right can be successful if we begin to defend ourselves against the attempts at division and defamation and organize a collective resistance.

BOYCOTT! Supporting the Palestinian BDS Call from Within

League for the Fifth International

Additional signatories can contact info@arbeitermacht or any of the signing groups. 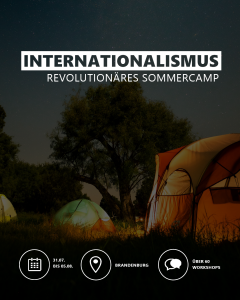 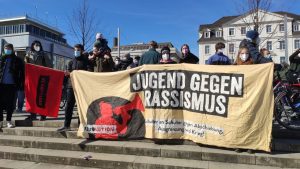 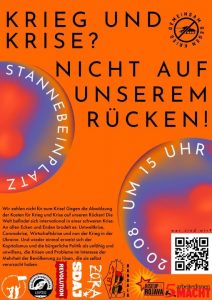